“60% of executives listed lack of collaboration as one of their top leadership challenges.”
American Management Association The high performing team surpasses the benefits associated with collaboration.  This article will touch upon…

During the first stage of team building an individual’s behavior is driven by a desire to be accepted by others and avoiding controversy. Serious issues and feelings are avoided as individuals gather information and impressions about each other and the task of the group.  The group tends to avoid conflict as they feel each other out.  There is a lot of energy invested in information gathering, which can frustrate some because they don’t see much getting done.

Balance the need for members to get to know one another, the foundation of future team growth and the task at hand; the immediate concern of the group.

Be directive.  With clear objectives and ground rules, the group can figure out how to get the task done. 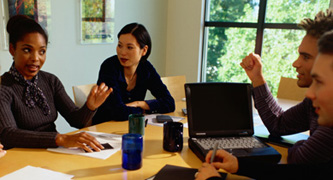 The storming phase is characterized by growth spurts and inevitable misunderstandings. Just like the teenage years are essential for personal growth, storming is essential for high performing teams.  For the conflict averse this stage is unpleasant and painful. Without the proper skills teams get stuck in this stage producing low moral, high turnover, low motivation, and inevitable failure. Team members describe the perpetually storming group as toxic or destructive.  Many teams will never move past this stage.

Emphasize tolerance, acceptance, and appreciation of differences in order to develop into high performing teams.

Remain directive in operational matters.  Refer back to objectives and ground rules developed in the forming stage. Leadership must be more accessible and understanding in order to facilitate discussions with team members about differences. To build trust, amend the ground rules with group approval.  When team members participate in the healthy resolution of their differences they will share their opinions and views without judgment. 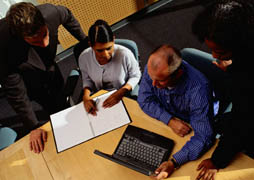 In the norming phase a teams co-creates a plan to utilize individuals’ unique contributions in support of team goals. The team moves from competition, often through compromise, and into collaboration.

Some team members begin by compromising around ideas and agreeing with others for the sake of the team.  To move out of this stage institute ways of utilizing team members’ differences to achieve group objectives.   Take responsibility for team success.

should act as a facilitator and enabler of a collaborative environment.  Ask lots of questions and challenge them to complete the task together.

High-performing teams are able to manage themselves and work effectively to get the job done without much external supervision. They are motivated, knowledgeable, competent, autonomous and able to handle the decision-making process without supervision.

Encourage creative conflicts.  Diversity is seen as a richness and asset to the team.  Celebrate your achievements.

Get out of the way. Paradoxically, when leadership lets go of their power to empower others the teams’ and their power increases.  The performing stage is uncomfortable for leaders who are accustom to managing employees.   When the team is able to carry out necessary decisions formal leadership may be minimal. Celebrate the achievement.  Soak in the rewards of leading a high performing team. Pay attention to signs of the team reverting to earlier phases and take necessary steps to move the team forward.

In conclusion, this model has helped many groups understand their unique circumstance and the environmental factors contribute to the group’s success.

For instance,  in a sales department this model encouraged team members to talk about their storming behavior.   They identified two challenges in their group development.  The commission structure and overlapping territory were fostering competition between one another.  Leadership decided to entirely split their territories and institute a team bonus when they met their monthly goal.  The result was sales staff shared ideas and contributed to each others success.  The staff instituted a weekly meeting to discuss what was working in their respective areas.

Another company’s sales division  had an entirely different conversation regarding storming.  A few people whom did not like the storming culture spoke up. Then a gentleman  spoke about how competition for him was like a spirited game of football, where each teams play made the other team stronger.  The conversation revolved around other sports metaphors. Some spoke of soccer,  football, baseball, and even hockey (my favorite).  The result was a discussion about rules of the game, ground rules, they could all abide by.

The previous two examples are what great facilitators do.  They listen to the group in order to foster conversations that help the group understand themselves and move forward.

Contact us to discuss how we can use development models to surface the challenges and opportunities impacting your team.