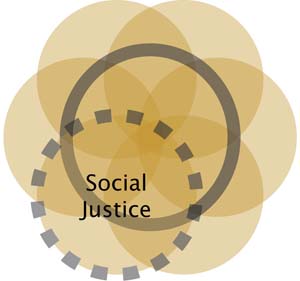 Adam Smith, the father of capitalism, believed all humanity shares a number of deeply rooted moral sentiments. Other social virtues are optional, except for the “remarkable distinction” of the observation of justice by individuals (Lappé & Perkins, 2004). I propose the dominant US culture values the individual over society (Stewart & Bennett, 1991) therefore we view social justice as it refers to individuals we can identify with rather then empathizing with others who are less like us.

Guy Kawasaki (2004) in The Art of the Start provides insight into the value of social justice in corporate culture.  He says if you’re in business, be hesitant of entering into a win-lose partnership no matter how attractive the terms. They seldom work out. He proposes it is bad for both partners because the deal seldom lasts, the smaller party will not support it, and its bad karma. Win-win partnerships are the only sustainable kind because every person exists in the larger context of organizations and society therefore, doing things that benefit you and not others does doesn’t scale. If you want to build a lasting scalable organization, it is imperative to set high moral and ethical standards.

What could we achieve if we thought of one another as equals and value everyone’s leadership style? Dr. Clair Graves father of Spiral Dynamics, a color coded model of human development, would describe it as a landmark of culture or the Turquoise Value Meme (V-Meme) A V-Meme describes the dominant worldview or paradigm of a culture. Turquoise is characterized as being the ultimate level of collaboration where the majority of society understands their interconnectedness.  Spiral Dynamics describes this as a jump in collective consciousness that would allow societies to understand and appreciate the self as part of a larger whole that also serves the self. (Beck, 1996) It is my goal to create the conditions for Turquoise to thrive. When facilitating a collaborative meeting I do this by influencing the place, conditions, and circumstances people meet.   By changing the dominant paradigm to one that favors the equality of individuals I attend to supporting structures of the whole.